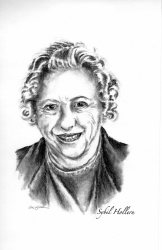 Sybil Hollern (1910-1994) Sybil Hollern St. Cloud’s only female police officer for 28 years. She was employed by the St. Cloud Police Department from 1947 to 1975. A year after retirement from the police force, she became the first female and only senior citizen on the St. Cloud City Council. She served three terms, from 1976 to 1989. She said she made a career out of being a city employee. Hollern grew up in south St. Cloud and left to attend the College of St. Catherine in St. Paul. After graduating from St. Catherine’s, Hollern taught physical education there for seven years. Later she received her Master’s Degree in physical education and health from Columbia University in New York. During World War II, she worked in Hanford, Washington, at Du Pont’s weapons operation in the investigations division screening applicants. Her job ended with the war and she applied for the job as policewoman in St. Cloud. As a police officer, Hollern worked with juvenile and female offenders. She said she felt she had an influence on youth in the community. She often took them into her home. In 1988, Hollern said it was difficult being the only woman in the police department. She recalled being the only officer required to have a college degree and never having the opportunity for promotion the male officers received. She said, “Let’s face it, this is a male community.” When Hollern ran for councilwoman, she said her mother told her, “I think you’ve lost your mind completely.” Hollern, however, said she ran because she felt a woman’s voice was needed: “A woman’s perspective is certainly different from men’s,” she said. “She was the one who was the conscience of the ordinary guy on the street,” said St. Cloud mayor and Hollern’s friend, Sam Huston. “If there was discrimination about her gender, she either ignored it, or laughed it off, or made her way around it,” Huston said. One of Hollern’s many concerns for St. Cloud was getting a decent wage for everyone. “I don’t know how, in good conscience, you could ask a person not to vote for decent wage for people.” She said. Hollern had one brother and one sister. In retirement, she maintained strong ties to her sister’s large family. In her spare time she played bridge. She was a member of the Daughters of Isabella and the American Association of University Women. She died in 1994 at the age of 83. 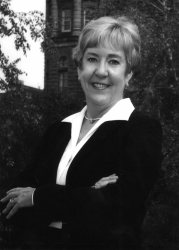 Patt Adair (1951-) Patt Adair was the first female warden at the Minnesota Correctional Facility in St. Cloud, Minnesota. She was appointed to head the adult male, closed-custody security facility in October 1995, and became the first female warden at St. Cloud and the first female warden in Minnesota at a high security facility. Born and raised in St. Paul, Adair graduated from Regina High School, attended St. Cloud State University for two years, and obtained her B.S. in Human Services from Metropolitan State University. Adair began her career as a social worker and then moved up the ladder. She held various positions at the Women’s Prison in Shakopee, Minnesota, including caseworker, unit director, and director of programs. While there, she created the first program in the country for inmate mothers and their children. In 1986, Adair became executive director of Genesis II, a non-profit agency for women in the criminal justice system. In 1989, she returned to Shakopee as assistant superintendent. She was appointed warden at the Willow River/Moose Lake facility in1992, where she administered the opening of the state’s first “boot camp” and the conversion of the Moose Lake Regional Treatment Center into a medium security prison. Inspired by Warden Jackie Fleming at Shakopee, Adair said: “I think my social work background and the values Jackie Fleming modeled, have always made it priority for me to deal with offenders as human beings and to treat them with respect and dignity. I have tried to model that for my staff.” Adair has been active in the Minnesota Corrections Association and the Minnesota Association of Women in Criminal Justice. In 2001, Adair was named Minnesota’s Correction Person of the Year. She was auditor for the American Corrections Association, serves on the United Way Board and was active in Forum of Executive Women; she has served on boards of Central Minnesota Task Forces on Battered Women, Jacob Wetterling Foundation, and Boy Scouts. Adair is married, has one grown son and three grandchildren.