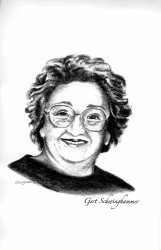 Gert Schwinghammer (1918-2002) Gertrude (Gert) Schwinghammer was the first woman inducted into the Minnesota Livestock Hall of Fame. When she received the honor on March 20, 1984, Schwinghammer said she hoped, “This might pave the way for other farm women.” For more than 50 years, Schwinghammer bred, raised, milked, and sold purebred Guernsey cattle. She was a long time Guernsey cattle exhibitor at the Stearns County Fair and the Minnesota State Fair. She was one of the first women approved to judge cattle. She was a member of the National Dairy Shrine; she was involved in 4-H leadership programs, Home Extension, the County Home Council, Laubach teachers, Albany and Streams County History Museums; she was the Avon Township clerk; and she was an active community volunteer. Schwinghammer was born on September 18, 1918, in Barr, Montana. Her mother died when she was a young girl. She was raised by her father and stepmother, John and Anna Koon. She graduated from North High School in Minneapolis and the Minneapolis Business College. Not born into farming, Schwinghammer led by doing. She married Berthold Schwinghammer on October 17, 1938. She said that if she wanted to be with Bert, she had to learn to like cows. Bert was working as a herdsman at Brandtjen Farms in Apple Valley, Minnesota, when they married. They later moved to Albany, Minnesota. Together they established a prize-winning Guernsey dairy herd on the Schwinghammer family farm near Albany, Minnesota. As a couple, the Schwinghammers were the first Stearns County dairy farmers and the first husband-wife team to be inducted into the livestock Hall of Fame. Their portrait hangs in the Hall of Fame in Peters Hall at the University of Minnesota. The Schwinghammer house was filled with dairy trophies, plaques, souvenirs, and all types of farm memorabilia. Gert’s colorful collection of cows extended to every room in the house. Gert Schwinghammer retired from the farm in 1997 after the death of her beloved husband and companion. Bert and Gert raised three adopted children. Gert Schwinghammer died on October18, 2002, at the age of 84. 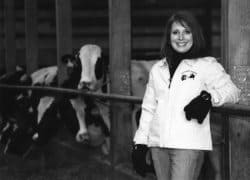 Linda Jennissen (1960-) Lina Jennissen was chosen by Governor Tim Pawlenty to travel with him on a trade mission to China in November 2005. As a farmer and chair of the Minnesota Division of the Midwest Dairy Association, she was asked to observe how check-off dollars were working to build demand for Minnesota dairy products in China. One of only two women in the agricultural delegation, Jennissen participated in over 21 live broadcast and print media interviews both pre-and post-mission. Her daily journal was posted on the Minnesota Dairy Association website. Born and raised in Albany, Minnesota, Jennissen graduated from Albany High School. She participated in numerous dairy projects and organizations to further the dairy industry, including 4-H club membership, leadership, and arts programs; showing cattle on county and state levels, dairy judging as well as helping milk 140 registered Holstein cattle twice a day on the Jer-Lindy family farm. Jennissen was employed by the Monsanto Dairy Business as a customer-care advocate from 1995 to 2002. She and her family managed the “All I Can Drink Milk Stand” at the Stearns County Fair for many years. In 1995, Jennissen was elected by the Dairy Producers Association to represent dairy farmers on the American Dairy Association/Dairy Council of the Upper Midwest. She also served as chair of the Minnesota Princess Kay Committee and as instrumental in developing a state-wide dairy princess program. From 2000 to 2006, Jennissen chaired the Minnesota Division of the Midwest Dairy Association and served on their corporate board. The Jennissen family was chosen the Stearns County Farm Family of the Year in 2000 by the University of Minnesota Extension Service and two years later they were the Minnesota Milk Producers of the Year. Jennissen is married and has been a role model for her four daughters. In her spare time she enjoys entertaining, cooking, and gardening.