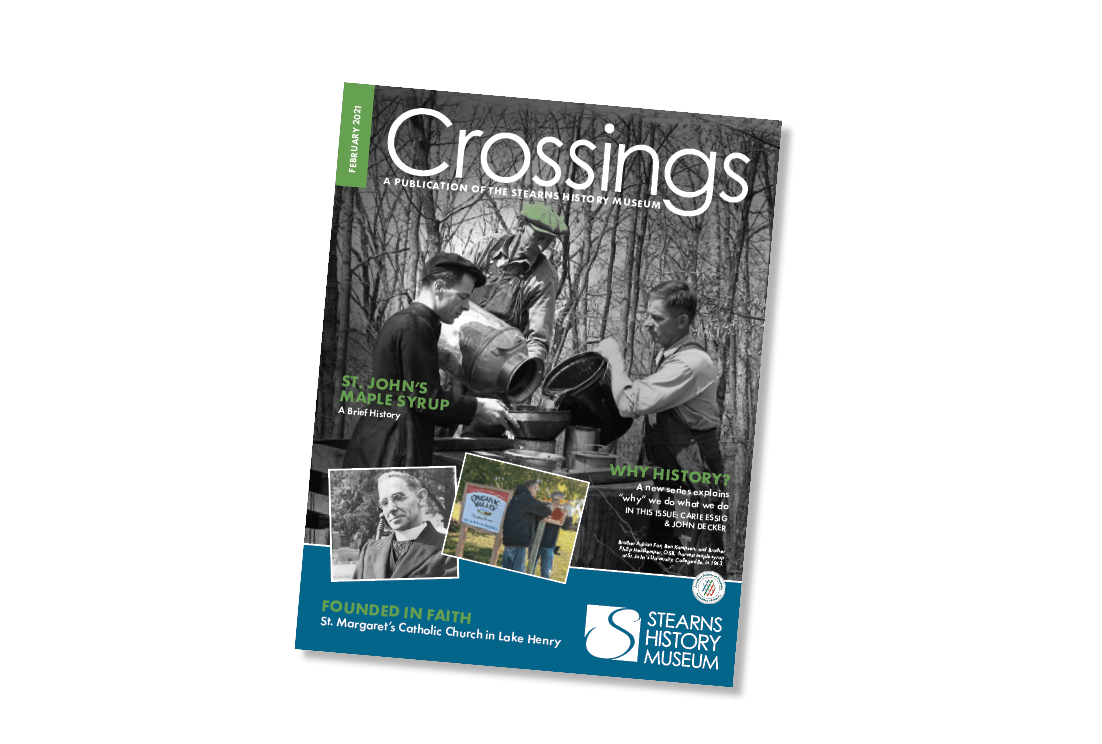 NOTE: This article originally appeared in the February 2021 issue of Crossings, a magazine exclusively produced for museum members. To read the whole story and receive the magazine four times per year, simply purchase an annual membership to the Stearns History Museum—you’re guaranteed to love it! Learn more here>>

Making maple syrup at St. John’s Abbey and University owes its beginning to sugar rationing during World War II. Perhaps to assuage their sweet tooth, the Rev. Wendelin Leutmer and a few other Benedictine community members at St. John’s tapped 150 trees, collected 1,440 gallons of sap, and cooked it in steam kettles in the candle shop into 45 gallons of heavenly maple syrup.

A story describing this inaugural effort appeared on April 16, 1942, in the student newspaper, The Record. The author, Robert Mertz, was rather prophetic when he speculated, “there is evidence that an eventual syrup industry is in the offing.” This may be one of the great understatements in St. John’s history, considering that Father Wendelin’s crew initiated a springtime tradition at St. John’s that has continued for nearly 80 years.

Small amounts of syrup were likely produced at St. John’s before 1942. In the same story, Mertz also reported, “Formerly a few trees were tapped each spring to secure food for the apiary.” Another story in The Record (April 24, 1959) noted, “prior to the ‘40’s a small amount of collecting was done, with boiling taking place in open kettles.”

In 1934, the Rev. Alexius Hoffmann, a monk at St. John’s who wrote Natural History of Collegeville, never mentioned sugaring at St. John’s, supporting the conclusion that little syrup was produced on campus before Father Wendelin and his friends. However, Father Alexius did report that Native Americans and the early settlers of the area, like their neighbors, the Eich family, were involved in maple sugaring as early as 1886.

The basic process of syrup making that we now use at St. John’s is much the same as in Father Wendelin’s time. Holes are drilled in sugar maple trees, a tube called a spile is tapped into the tree to collect the sap, a container is hung on the spile to catch the liquid that is ultimately transported back to the sugarhouse where it is cooked into syrup. The only real difference is that portable electric drills, a high-efficiency evaporator, a tractor, and other modern equipment have replaced the brace and bit, open kettles, and horses.

The first season must have been very successful because later that year, the monks constructed a dedicated sugarhouse that was used the following spring (1943).

There’s much more to this story! To receive Crossings, our exclusive magazine that’s printed four times per year, sign up for an annual membership today >>

Below: The Eich Family harvests Maple Syrup in Collegeville, ca. 1905.