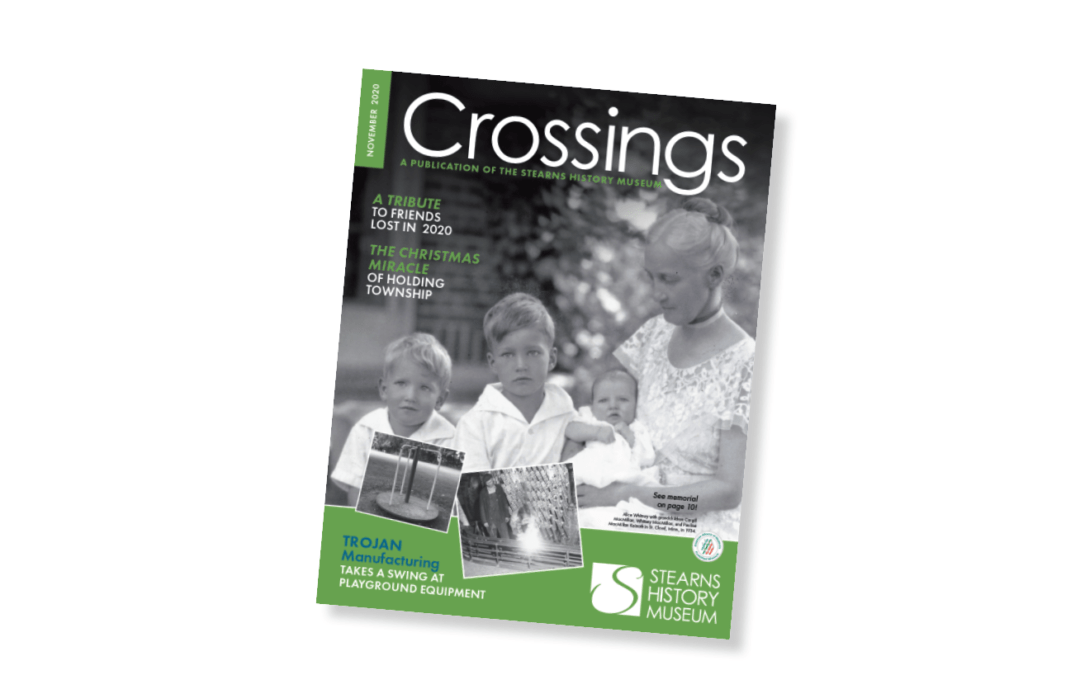 NOTE: This article originally appeared in the November 2020 issue of Crossings, a magazine exclusively produced for museum members. To read the whole story and receive the magazine four times per year, simply purchase an annual membership to the Stearns History Museum—you’re guaranteed to love it! Learn more here>>

Aah, recess – a favorite class of past and present school-age children. (Although lunch is high on the list, as well). It’s a great time to get away from the classroom, socialize with your schoolmates, get some fresh air, and, most importantly: exercise. Before 1900, most U.S. and Central Minnesota school grounds and local parks had very little or no playground equipment. The Progressive Movement during the early 1900s changed that. City parks and school playgrounds began adding equipment as a safety measure to take kids off the streets. A St. Cloud man, Paul Held, took advantage of this trend. He designed and built a merry-go-round and installed it behind his blacksmith shop. The birth of a new business was on the horizon.

Paul Held was born in Fuerth, Germany, on August 12, 1873. His father was a successful merchant until the financial Panics of 1890 and 1893 hit Europe. His family suffered greatly and spiraled into poverty. Paul graduated from Volksschule, eight years of compulsory education in Germany, at the age of 13. He decided to make a living at this early age and signed up as an apprentice under a master blacksmith for three years, paying the blacksmith 50 marks per year. That’s approximately $16.50 U.S. dollars at the time. In his third year of apprenticeship, he went off on his own, traveling to different countries in Europe. Working under several master blacksmiths, Held finally made a wage and sent a majority of it to his family. He was influenced by his brother Jacob, later known as Brother Maurus, OSB, to immigrate to America. He came to the United States in 1895 and eventually found a blacksmith’s job at Napoleon, Ohio.

After one year, Jacob convinced Paul to migrate to St. Cloud. He rode a passenger train to Anoka, where he ran out of money. Held then hitched a ride on a freight train and made it to St. Cloud. Paul found immediate employment with the U.L. Greenough blacksmith shop, where he learned horseshoeing from an experienced blacksmith. Upon his arrival at St. Cloud and shortly after obtaining a job, he sent for and married his boyhood sweetheart, Anna Basel. The couple would go on to raise two daughters and nine sons…

There’s much more to this story! To receive Crossings, our exclusive magazine that’s printed four times per year, sign up for an annual membership today >>

Above: Plant Manager Peter Held of the Trojan Manufacturing Company watches welder, Harry Hendrickson, work on the bottom of a slide at its East St. Cloud location in June 1955. (Photo from the Myron Hall collection.)