The Women’s Fund (2003-) The Women’s Fund of the Central Minnesota Community Foundation is established to create and support programs that enhance the lives of all women and children, involving women as leaders and donors in the process. The Women’s Fund of the Central Minnesota Community Foundation is the first pool of financial resources dedicated to serving the needs to women and children in our communities. The Women’s Fund was publically launched in June of 2003 with the announcement of a $100,000 challenge grant from the Otto Bremer Foundation for which an additional $200,000 had to be raised. Thirteen women responded yes to become a member of the Steering Committee which would shape the Fund and its objectives. Led by Molly Renslow as Chair, the group met frequently during 2002-2003, crafted a mission statement, conducted research, and selected funding priorities for grants that would be made. They made personal financial commitments to the Fund and assisted with requests of others. When the group announced the Fund at the first Women on Stage which was held at the College of St. Benedict, they were able to state that $100,000 had already been committed. The Bremer challenge was met by December 2003, 2 ½ years ahead of schedule! Less than four years after the announcement, the following had been established: • Women on Stage…at the Ranch, our 4th annual event raised over $100,000 for women and children. • The Williams Wobegon Ride is an annual family bike ride benefitting the Julianne Williams Fund which supports outdoor activities for girls. • Nearly $100,000 in grants have been given over a three yea period in the categories of middle school girls, women in transition, and older women. • Nearly $1,000,000 has been raised through the Women’s Fund The potential of the Fund is immense; the needs are multiple; women and men who care will respond, because “When women prosper, communities prospers.” 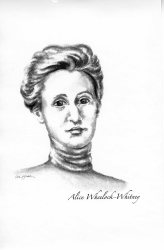 Alice Wheelock Whitney (1868-1954) After her husband’s death in 1929, Alice Wheelock Whitney stepped forward to complete a project she and her husband hoped to champion: the establishment of an airport in St. Cloud. Whitney donated 143 acres to the city for an airport in her husband’s name. However, the site was not developed by the city and remained an open field with no buildings. In 1933, an exchange of property was made at the north end of the city near St. Cloud Hospital, which included 14 acres north of the Sauk River that was later developed as a boy’s camp. The Albert G Whitney Memorial Airport was dedicated in June 1935. But St. Cloud’s rapid growth around the airport called for a location change. In 1967, the airport was moved to southeast St. Cloud, its present location, not far from the first site donated by Whitney. The old airport land became Whitney Park. Alice Whitney, who raised three children, used her many talents in social, church, and Philanthropic engagements. She was active in the first chapter of Campfire Girls in St. Cloud and was a board member of the Children’s Home Society of St. Paul. She also served as St. Cloud’s premiere hostess, welcoming public figures to her house such as soprano Marian Anderson and first lady Eleanor Roosevelt.