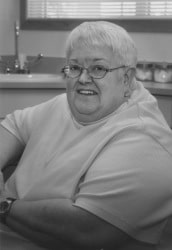 Mary Stiles (1944 – ) Dr. Mary Stiles became the first female doctor on staff at the St. Cloud Hospital when she began a solo practice in Annandale, Minnesota, in 1975. Although she created a stir as the female doctor, she did not encounter a lot of negativity because the “community was so delighted to have a local physician that it really was not an issue.” Stiles said the bulk of her patients have been women but no males ever refused to see her because she was female. In fact, some of her most loyal supporters have been her male patients. While a child, the father of one of her best friends was a physician. Dr. John Chenault encouraged both of them to pursue a career in medicine. They enjoyed pouring over his medical books during their school years and both subsequently followed medical careers. Born in Kansas, Stiles spent her childhood and adolescent years on the East Coast, in Alabama, and New Canaan, Connecticut. She attended undergraduate school at Pennsylvania State University and graduate school at the University of Missouri. Stiles earned her masters of science and M.D. degrees from the University of Missouri Medical School. She did an internal medicine residency at Abbott Northwestern Hospital in Minneapolis. Stiles began a solo practice in Internal Medicine in Annandale at a newly established clinic built by the local community in 1975. In 1982, she sold that practice to the Buffalo Clinic. She continued to work for the Buffalo Clinic until 1988 when she moved the practice to St. Cloud, joining two other internists. Stiles practiced with them until 1993, when she joined Heartland Clinic. Heartland Clinic merged with CentraCare in 1995. After 31 years in medicine, Dr. Stiles retired from medical practice in October 2006. She has many interests outside medicine including reading, music, woodworking, and photography. 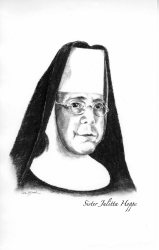 Sister Julitta Hoppe (1875-1971) Sister Julitta Hope was born in New Munich, Minnesota on June 11, 1875, to Henry and Theresa (Reiland) Hoppe. She entered St. Benedict’s monastery in 1895. In 1911 she became a registered nurse, having graduated from Nurses Training school, located at St. Raphael’s Hospital on 9th Avenue North in St. Cloud, now known as Place of Hope. Sister Julitta spent 60 years of active service in hospital work, most of it as an administrator, surgical supervisor and superior of the Sisters stationed at St. Raphael’s Hospital. She spent long hours caring for the sick without modern conveniences and adequate supplies. Kerosene lamps were used for light, hand bells were used by patients to call for a nurse, lumber wagons or buggies were used to transport patients. Sister Julitta and other nurses went from home to home caring for those sick with typhoid or the flu. Often they assisted grieving families bury their dead. Sister Julitta was one of the original planners of the present St. Cloud Hospital. The prioress, Mother Louise Walz, was aware of the need for a larger hospital and instructed Sister Julitta to find land and draw up plans for a new, larger hospital. About the land purchased for the site of the new hospital, Sister Julitta said, “These 24 acres were out in the country, away from everybody. There was little prairie over toward the north, and we decided to take land that far.” Over the years there have been many additions to the hospital, but the original part, designed by Sister Julitta, still stands. The Hoppe Auditorium at the St. Cloud Hospital was named after Sister Julitta. When she died on February 26, 1971, at the age of 95, she was the oldest member of the St. Benedict’s Monastery in St. Joseph, Minnesota. 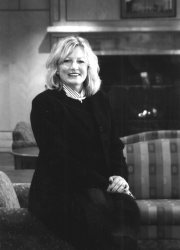 Linda Christianson Chmielewski (1950-) Linda Chmielewski, led the St. Cloud Hospital’s efforts to enhance patient services and nursing practices. Her intelligence, high standards, optimism, and coaching talent have made Chmielewski an outstanding leader. Chmielewski was born in Minneapolis on April 21, 1950, the eldest of three daughters born to Wallace Leslie “Les” Christianson, a physics/chemistry teacher, and Arnell Ringerud, a Registered Nurse. She grew up in Glenwood, moved to Foley, and graduated in 1968. While earning a B.A. in Nursing from Gustavus Adolphus College, she married Joe Chmielewski, “a wonderful, patient person who has supported and sustained me for (35) years.” Chmielewski advanced professionally over the years—from staff nurse to Critical Care Instructor at the St. Cloud VA Hospital, to Critical Care Coordinator at the St. Cloud Hospital in 1981. Named a “Minnesota Nurse of the Year” in 1986, she earned a M.A. in Administration from the University of Notre Dame in 1989 and became Vice-President/CNO in 1992. “I have never, ever been bored in my career,” Chmielewski, who is also mother of four. “I work with wonderful people and have the satisfaction of making a difference.” Chmielewski has made a difference through her commitment to community, mentoring, nursing, excellence, and professional nursing environment. She founded and co-Chaired the Parish Nurse Advisory Committee; and today, works closely with the College of St. Benedict/Saint John’s University and St. Cloud State University Nursing departments. Confidence in her 1,400 nurses spurred the decision to enter the Magnet Designation process through the American Nurses Credentialing Center. “THE highlight” of Chmielewski’s professional career was receipt of the Magnet Award in 2004, the highest national and international recognition for nursing excellence, one of only 200 worldwide. “Every decision I’ve made is based on enhancing patient outcomes…We’re always improving (practices) and the work environment for our staff,” notes Chmielewski, who takes advantage of opportunities and finds “fun in the exploration of life.”